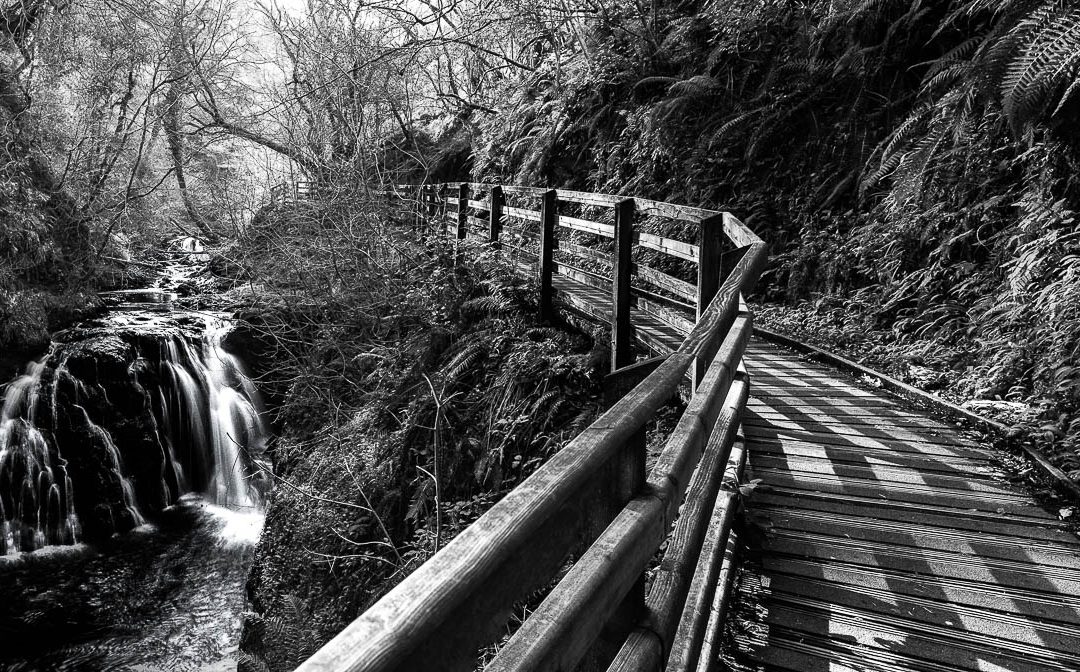 I said in the previous post I hoped to make some panoramic images on the Antrim Coast and a couple of recent trips in that direction could be classed, at best, as just partially successful.

I had been hoping for some time to get some photographs in Glenariff Country Park. There is a wooden walkway that follows the river and in places, given the right conditions, I was confident it would make for some worthwhile images.

On both occasions I set off intending to stop and photograph some likely places on the Antrim coast on my way to the Glens.

I had photographed Glenariff before but it had been in summer and I had only limited success. I didn’t have a tripod – a near necessity when photographing moving water and the trees form a canopy blocking much of the light. A further complication in summer is the number of visitors and the aggravation erecting a tripod in the middle of the walkway would cause.

On my visit this time I did have a tripod and being early spring there were few visitors for me to obstruct.

The downside was the thick foliage and deep green lustre of summer I remembered hadn’t developed yet and the trees look a bit bare.

This image is a panoramic, combining two photographs. As can be seen the trees are bare. I’ll visit again in a month or two and go early when its not so busy

I’m told that I shouldn’t combine black and white and colour photographs in the same post so I’ve kept this one till last.

This image was taken with the intention of using it for stock. Normally with such a photograph I would follow the cyclists with the camera, keeping them sharp while blurring the background to show movement. Here I kept the camera stationary and used a slow shutter speed to blur the cyclists making them unidentifiable, while keeping the background sharp. Ideally I would’ve used a slower shutter speed but then I would’ve needed that tripod agiain.